Forgiveness: Pulling Out the Snake’s Fang

Forgiveness: Pulling Out the Snake’s Fang

You don’t choose what happens to you, but you have
the power to choose how you are affected by it.
—Nona Jones

On June 17, 2015, Polly Sheppard attended Bible study at Emanuel African Methodist Episcopal (AME) Church. That night, Dylann Roof, a self-professed white supremacist, arrived and spent an hour in the study with his victims before pulling out a gun during prayer time. In all, he shot 12 people, nine of whom lost their lives, including Emanuel AME pastor and State Senator Clementa C. Pinckney. Polly witnessed her friends being gunned down in front of her, and when Dylann reached her, she recalled him saying, “I’m not going to shoot you. I’m going to leave you here to tell the story.”

Dylann Roof wanted to start a race war that day. He chose Emanuel AME—also known as Mother Emanuel, the oldest AME church in the South—as the spark to ignite that war. But what he encountered was something wholly different. Though he meant to terrorize and devastate, relatives and friends of the victims stood up one by one just a few days later in court and told him they forgave him. They released the poison that he had inflicted on their community, taking that anger and turning it into grace. News of their act of forgiveness took over the news and drowned out Roof’s message of hate.

I met Polly at a private screening of Emanuel, a movie about the shooting. I sat next to her, and as we watched the movie side by side, I sensed her peace, even as the terrible events of that day unfolded on screen. To be willing to relive the worst day of your life over and over and still speak up about how love could triumph over hate took an act of courage I could barely conceive.

June 17, 2015, was also the day that allowed Polly to find her voice. It wasn’t an easy process. The anger and depression were all-consuming. At first she wasn’t sure if she was ready to forgive Roof’s actions, but she ultimately found an inner strength in the act of forgiveness. This led her to share her story over the next five years. A year after the shooting, she said, “To heal, we must forgive. That is what I learned this past year. The shooter in Charleston had hate in his heart. The shooter in Orlando had hate in his heart. And the shooter in Dallas did, too. So much hate, too much. But as Scripture says, love never fails. So I choose love.”

Polly took back her power through forgiveness. She couldn’t undo what had been done, but she could rise above it and bring some good out of it. “By taking back my power,” she said, “I realize that I am not a victim. I am victorious. I had faith before, but now I have gained much more faith and strength.”

Knowing she couldn’t change the past, Polly decided to change the future instead. By turning her worst moments into something she would spend the rest of her life sharing with the world, she brought light out of the darkness. Her words and testimony helped heal a nation struggling with violence and racial tension. Now in her mid-70s, she continues that journey by helping raise money to fund young people who want to enter nursing, specifically serving in the prison system, where she spent her career.

Most of us will never face the stark reality of watching our friends die, of having to decide how to forgive what feels unforgivable. But for many of us, in each of our hearts, there is someone or something that holds us back, and those wounds continue to fester.

As the most senior member of the Christians at Facebook community, I was invited to be the opening speaker at the Emanuel movie screening, nearly four years to the day after the shooting. At first I considered turning it down. What the organizers didn’t know was that I had grown up in a town outside Charleston, less than 20 miles from where the shooting happened, and I had avoided going back for two decades.

The amount of verbal abuse and threats I received during my childhood scarred me in ways I never allowed myself to process. I had never fully come to terms with what it was like to grow up experiencing that level of mistreatment, and so I coped with it through avoidance. But it still haunted me. To stand on a stage and speak about the ultimate forgiveness of families who had lost those they loved felt contradictory when I myself had never come to terms with the trauma of my childhood. This discrepancy forced me to take a long, hard look at how much anger I still harbored. Sitting next to Polly, hugging her during the movie, and watching her tell her story to the world taught me what true grace looks like. If she could look back with dignity and forgiveness, then I could do no less.

Country Lights Uganda:   How to Live the Bible — Goodness Is Always Greater

Forgiveness creates its own power and soothes the pain of old wounds. It allows us to break free of the hold the past has over us. But it isn’t easy. I wish I could say that that one moment of decision changed everything, but I had yet to learn that forgiveness is both a choice and a process. Like any other kind of healing, it happens over time. The catharsis is gradual; it teaches us patience as we learn to let go of our pain.

Imagine the hurt of being wronged as a snake’s fang embedded in your skin. As long as it’s there, the poison continues to infect you, and the wound can’t heal. Your suffering continues, and resentment grows. The pain of removing the fang—of choosing to forgive—can be immense in the moment, but its benefits to your psyche cannot be overstated. It not only gives you a chance to heal and recover, but it stops the poison from continuing to enter your body. No longer festering, the wound can now close as your body filters out the remaining resentment, anger, and distress. Removing the fang is the first step to becoming whole again.

Though forgiveness is a powerful force, in American society it is sometimes viewed as a weakness, as if by forgiving someone, we are letting them off the hook for their transgressions. What we don’t realize is that forgiveness is for the forgiver, not for the forgiven. Not only does it yield psychological benefits, but it also yields physical and emotional dividends.

Dr. Loren Toussaint, professor of psychology at Luther College, has studied forgiveness for over two decades. According to his research, those who score high on measures of forgiveness showed evidence of major personal benefits, especially to mental health. In one study, his team demonstrated that among those living with a high level of stress, those who also exhibited high levels of forgiveness had fewer negative mental health outcomes. Simply put, forgiveness protects our minds from the negative consequences of stress. Further studies Toussaint performed show that forgiveness in the workplace is associated with a 25% increase in productivity. This means that a workplace where people are more forgiving of one another is one that also produces better results—for both the forgiver and their company.

Not everyone is asked to offer the grand gesture of forgiveness that Polly has displayed, but a grand gesture isn’t always necessary. Freedom is pulling out the snake’s fang to stop the resentment and pain from stealing your peace of mind. Only in this way can we process the hurt and find a path to peace. 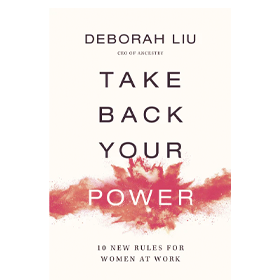 Adapted from Take Back Your Power: 10 New Rules for Women at Work by Deborah Liu. Click here to learn more about this book.

You can’t make the world fair, but you can take back your power.

As a woman in Silicon Valley who worked her way to the top of the corporate ladder—she’s a former VP at Facebook and the current president and CEO of Ancestry—Deborah Liu knows firsthand the challenges and obstacles in the workplace that keep the deck stacked against women in the workplace … and the ways to overcome them.

For every woman who grew up competing on the uneven playing field, who is told she is too aggressive, assertive, dramatic, or emotional, this book is the battle cry you need to learn to thrive within the system that exists today, even if it’s not the one we wish it were.

Take Back Your Power presents both hard data and Liu’s personal experiences from twenty years as a woman leader in the male-dominated tech industry to help you:

You have the power to change the future of work for yourself—and for women everywhere.

Deborah Liu is a seasoned technology executive based in Silicon Valley. She is the president and CEO of Ancestry, the company at the forefront of family history and consumer genomics. Prior to this, she served on the leadership team of Facebook, where she was the vice president of Facebook App Commerce. During her time there, she helped create Facebook Marketplace, Facebook Pay, Facebook Audience Network, and App Install Ads. Previously, she spent several years at PayPal, where she led the eBay marketplace product team, created the charitable donations and social commerce teams, and worked in corporate strategy. She also serves on the board of Intuit and cofounded the nonprofit Women in Product. She lives with her husband, three kids, and mom in California. Learn more at debliu.com.