How Great Thou Art

Home > Blog > How Great Thou Art

How Great Thou Art 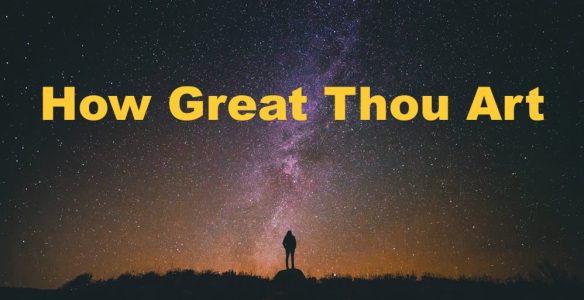 “O Lord my God, When I in awesome wonder, Consider all the worlds Thy Hands have made;

I see the stars, I hear the rolling thunder, Thy power throughout the universe displayed.

Then sings my soul, My Savior God, to Thee,

In the chilled and crisp early morning, I drove into the woods and then walked the last few hundred yards. It was about an hour before dawn and between the lack of moonlight and the canopy of the forest, it was so dark that I could not see anything. I used a small penlight to find the way to my intended location. I hoisted my hunting gear on my shoulders and began the climb up to the top of the hunting stand.

As I got to the top of the ladder, I looked up and froze and awe and amazement, for what I saw could only be the handy work of God. Given the chillness of the night, the lack of moisture in the air, the darkness of the night and the absence of pollution and city lights, the  heavens opened up like I had never seen before.

I looked at the stars, recognized constellations and could only praise the awesomeness of God. As I saw what His hands had made. I thought how the universe displays His power. I could only think of how great He is, as I realized that what I was seeing was only a thumbnail of the universe that can be seen with the naked eye.

Country Lights Uganda:   Art to Inspire Your Love for the Bible: An Interview with Artist Leslie Kehl Vann

With space placed telescopes we constantly see articles about new discoveries in space. Recently astronomers announced the discovery of a fifth planet forty five times bigger than planet earth orbiting a star about the size of our sun, some forty one light years away from earth.

Scientists tell us that the observable universe has been determined to have a width of billions light years and continues to expand at an accelerating rate. When God said “let there be light” He really meant it.

As I sat in the stand, I looked and listened as dawn broke and the forest came to life. As I watched squirrels hop from limb to limb in the majestic trees and heard the birds chirp for the joy of the morning, I could only think that all was created by the hand of God.

Country Lights Uganda:   How This Dutch Congregation Pulled Off a 96-Day Service

Thought: Have you taken the time lately to be still in the wonderful of our Almighty God?

By John Grant
Used by Permission

Then Sings My Soul by Hillsong

The post How Great Thou Art can be found online at Daily Devotionals by Thoughts about God.