Jesus: The Word Made Flesh

Jesus: The Word Made Flesh

A work of art speaks a truth we can’t speak outright: the truth of the human experience. Love, joy, grief, guilt, beauty—no words can communicate these. We can only represent them in stories and pictures and songs. Art is the way we speak the meaning of our lives.

Throughout the play Hamlet, the prince seeks the answer to Pontius Pilate’s question: What is truth? How can we tell the difference between our prejudices, our assumptions, our feelings, and the reality around us?

In the beginning of the play, Hamlet proclaims that his inner world is authentic. His grief for his dead father is beyond mere show. But as the play goes on, he comes to doubt that inner world as a guide to reality. His moods distort his experience of the world. He does not know whether he can act on his own assumptions. He envies those people—an actor, soldiers—who can simply perform their roles in life with complete conviction. At the end of the play, having confronted death, having come to see that “there’s a divinity that shapes our ends,” he experiences a reversal. He begins to perform life with conviction. He leaps into his dead lover’s grave and declares that he can make a show of his grief as well as any man. In the final scene, his entire life becomes a performance. His body is carried to a stage and he becomes the play that has just been put on. Hamlet becomes Hamlet. His life becomes a work of art. It becomes the answer to Pilate. It tells the truth he could not find.

Two years before he died, John Keats put it like this: “A Man’s life of any worth is a continual allegory, and very few eyes can see the Mystery of his life—a life like the scriptures, figurative.”

Our lives are works of art. They speak their meaning.

The meaning of Jesus’ life is the meaning of everything. His truth is truth. His right is right. His beauty is beauty. These are human ideas—truth, right, beauty. These are ways we humans experience the indescribable Logos. But how do we know our truths are true, our right is right, our beauty is beautiful? We know by knowing Jesus. He is what Coleridge said he was: “the World as revealed to human knowledge . . . the total Idea that modifies all thoughts.”

When we come to know a person, any person, we come to see at least a little bit of what he sees, to feel and know and experience life along with him. To know Jesus is to experience the Word. “He who puts on the likeness of Christ becomes Christ,” Coleridge said.

“Whoever sees me sees him who sent me,” said Jesus.

Here’s a mental picture of it. Nature is the world in which we live. Meaning is an immaterial realm above nature: the supernatural. As a word—love—is language expressing living meaning (the experience of love), so nature—matter, flesh, life—is a language expressing meaning (love, hate, masculine, feminine, good, evil). Language connects nature to meaning. Our flesh is language. Our lives are language. They have a meaning.

We know such connections between nature and meaning exist, and we know that we can get that meaning right or wrong. We know this because of numbers. The next time a scientist tells you all of life is matter, ask him to show you a two. Where is it? What does it look like? How does it taste? He can make a symbol for two: 2. He can show you a two incarnate: two pennies, two bricks. But two is a human construct of an immaterial truth, a connection in our minds between nature and the truth about nature. We know we can hit or miss that truth because if we use numbers properly, we can predict when light will reach the earth from millions of miles away, and if we use numbers wrongly, we will blow ourselves through the lab window to kingdom come. Numbers connect nature to a truth about nature—or a falsehood—through the mind of man.

Likewise, your life connects nature to the truth of nature, its moral meaning. It is like a number, like a word. To smile at a child or to play the piano speaks something different than to cheat on your spouse or to break a storefront window with a brick. Ultimately, the totality of our lives—our perceptions, words, actions—express the whole idea that is our self, our soul. Your soul is not a ghost in a machine; it is a story your life tells. We are just flesh, but flesh is a language, a word; it speaks of a meaning, right or wrong, good or evil, our selves, our souls.

The prophets knew this. They used their lives as language. They performed their holy visions through actions. Hosea married a prostitute to demonstrate how Israel had gone astray. Jeremiah smashed a jar to show what God would do in his wrath. Ezekiel lay on his side, one side and then the other, for more than a year, eating bread cooked on dung to prophesy about the coming siege of Jerusalem.

John the Baptist did this too. He made himself a literal voice crying in the wilderness to show figuratively that the messianic prophecies of Isaiah were coming to pass. He baptized with water as a metaphor for how the Messiah would baptize with fire and the Holy Spirit.

Jesus goes beyond the prophets. His flesh—his life—his word is the Word. It speaks the structure of meaning, the Logos. He doesn’t just perform meaning like Hamlet does or like the prophets do. His life is the meaning. When you lie on your side for a year, that’s all meaning, but it’s not much of a life. Jesus lives life and everything he does has meaning.

Jesus lives life, and his life means the Logos. His miracles aren’t just metaphors, they’re also miracles. When he heals the blind, he tells us he will make us see—but he also heals the blind. When he makes the lame beggar walk, he tells us he will lift our souls out of their crippling deformity—but he also makes the beggar walk. “The works I do in My Father’s name testify on My behalf,” he said.

He really drinks wine. He really eats with sinners. He loves his friends. He appreciates the beauty of nature, the lilies of the field. He loses his nerve and sweats blood in terror when he faces torture and death. Jesus is meaning, but Jesus is Jesus too, a man in full. 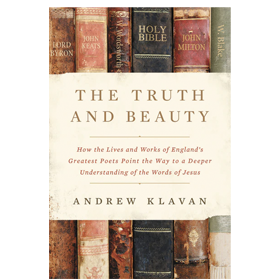 Adapted from The Truth and Beauty: How the Lives and Works of England’s Greatest Poets Point the Way to a Deeper Understanding of the Words of Jesus by Andrew Klavan. Click here to learn more about this book.

Country Lights Uganda:   Poll: Churchgoers stick around for theology not music or preachers

Follow Andrew Klavan to a deeper, richer understanding of the words of Jesus.

Andrew Klavan believed what he read in the Gospels, but he often struggled to understand what Jesus really meant. So he began a journey of wrestling with the beautiful and often strange words of Jesus.

He learned Greek in order to read the Gospels in their original languages, and he vowed to set aside any preconceptions about what the Scriptures say. But it wasn’t until he began exploring how some of history’s greatest writers wrestled with the same issues we confront today—political upheaval, rejection of social norms, growing disbelief in God—that he found a new way of understanding what Jesus meant.

In The Truth and Beauty, Klavan combines a decades-long writing career with a lifetime of reading to discover a fresh understanding of the Gospels. By reading the words of Jesus through the life and work of writers such as William Wordsworth and John Keats, Mary Shelley and Samuel Taylor Coleridge—the English romantics—Klavan discovered a way to encounter Jesus in a deeper and more profound way than ever before.

For readers seeking to find renewed meaning in the words of Jesus—and for those who are striving for belief in a materialistic world—The Truth and Beauty offers an intimate account of one man’s struggle to understand the Gospels in all their strangeness, and so find his way to a life that is, as he says, “the most creative, the most joyful, and surely the most true.”

Andrew Klavan is an award-winning writer, screenwriter, and media commentator. An internationally bestselling novelist and two-time Edgar Award-winner, Klavan is also a contributing editor to City Journal, the magazine of the Manhattan Institute, and the host of a popular podcast on DailyWire.com, The Andrew Klavan Show. His essays and op-eds on politics, religion, movies, and literature have appeared in the Wall Street Journal, the New York Times, the Washington Post, the LA Times, and elsewhere. 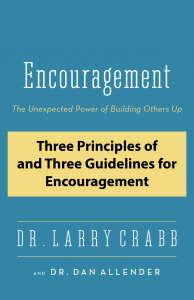 Sign up today for the Zondervan Books Faith in Action monthly email newsletter and receive the PDF eBook Three Principles of and Three Guidelines for Encouragement by Dr. Larry Crabb and Dr. Dan Allender, adapted from Encouragement: The Unexpected Power of Building Others Up.

Each month you’ll receive an email with a deal, a feature article, and book samples designed to help you find more life-changing books for your reading and listening lists.

The post Jesus: The Word Made Flesh appeared first on Bible Gateway Blog.