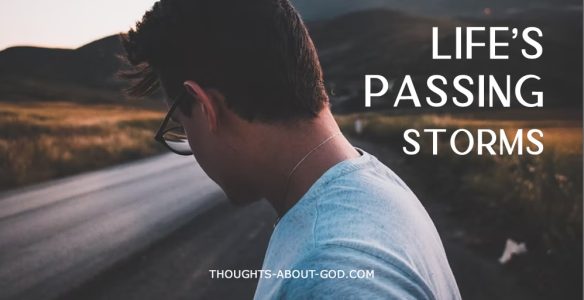 No storm in life will last forever, and when it passes, we can thank the Lord for His rescue and constant watchfulness.

Everyone experiences storms in life—occasions that bring pain, suffering, or loss. And it’s in these turbulent times that all sorts of questions come to mind:

Where is God? Why has this happened? Was it something I did? Did God cause it, and if so, why?

When we find ourselves in tumultuous situations, the safest place to go for answers is God’s Word.

The literal storm described in today’s passage provides insight about the Lord’s role in the various upheavals that come our way. According to verse 25, God was responsible for this storm because He was the one who raised the winds and waves that frightened the sailors.

Turbulent times encourage us to do what those sailors did—in their misery and helplessness, they cried out for God’s help. He then rescued them from their distress by calming the storm and guiding them to a safe haven. In response, they thanked the Lord for His loving kindness and wondrous deliverance and praised Him publicly.

No storm lasts forever, and there’s nothing like the sense of relief that comes once violent weather is past. Let’s remember to respond like those grateful sailors when the time comes, and until then to endure with our eyes on the Lord.

“Those who go down to the sea in ships, Who do business on great waters; They have seen the works of the LORD, And His wonders in the deep.
(25) For He spoke and raised up a stormy wind, Which lifted up the waves of the sea.
They rose up to the heavens, they went down to the depths; Their soul melted away in their misery.
They reeled and staggered like a drunken man, And were at their wits’ end.
Then they cried to the LORD in their trouble, And He brought them out of their distresses.
He caused the storm to be still, So that the waves of the sea were hushed.
Then they were glad because they were quiet, So He guided them to their desired haven.
Let them give thanks to the LORD for His loving kindness, And for His wonders to the sons of men!
Let them extol Him also in the congregation of the people, And praise Him at the seat of the elders.”

If you don’t see our comment form you can find it here: https://thoughts-about-god.com/blog/charles-stanley_lifes-passing-storms/

•  They Say I’m Nothing, but I’m Something by Londeka Zondi

•  Getting Life Back on Track by Marvin Kehler

The post Life’s Passing Storms can be found online at Daily Devotionals by Thoughts about God.